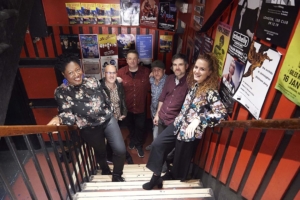 The Crowd Company sound evokes the spirit of 60s and early 70s funk as well as modern day funk jam bands whilst also focusing on strong soulful songwriting which combine funk with soul, blues and modern jazz. The band have drawn accolades from their musical peers and have shared the stage with the likes of George Porter Jr from The Meters, Daptone act Saun & Starr, as well as opened for  The New Mastersounds, The Monophonics and Alan Evans Trio.

A busy working band…Crowd Company headline many leading venues and have played prestigious venues such as The 100 Club, The Borderline, Band On The Wall, Concorde2. In a previous incarnation the band toured the USA west coast playing venues such as Boom Boom Room and Slims in San Francisco.

The group is renowned for its dynamic, live performances and this spirit is captured onto analog tape on their debut album ”Now Or Never”. This release features appearances by Alan Evans from Soulive (who also mixed the album) and Joe Tatton from The New Mastersounds.

Third full-length “Lowdown“ dropped at the beginning of 2020 and was touted by critics and fans alike as the band’s best yet. It features horn players Ryan Zoidis and Eric ‘Benny’ Bloom from Grammy nominated US funk band Lettuce on all tracks, was once again produced by Alan Evans (who also guests on a track) and was mastered by Grammy award winning mastering engineer Brian Lucey. This album is without a doubt a substantial step up for Crowd Company work and perfectly showcases a group that has matured into a well-oiled machine.

With three albums under their belt, a prolific collaboration underway with Alan Evans and the Vintage League Music label, almost non-stop live shows and a growing fanbase, Crowd Company are a name we’re sure to hear much more of in the future!