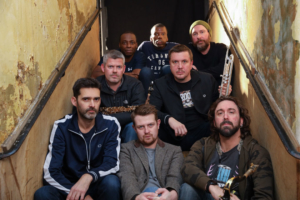 With their 5th album «Stand Up For Love» dropping worldwide on May 22nd on their own Haggis Records, UK funk/soul kings The Haggis Horns release a second taster single from it on May 8th .»Suzi Traffic» walks a rockier path than the previous single «Haggis Express» but it still features their trademark funky supertight horns and rhythm section. On lead vocals is longtime and original lead singer John McCallum who has been with the band since their 2007 debut «Hot Damn!». John has been a member of the Corinne Bailey Rae band since day one touring the world with the UK soul star as singer and guitarist. On this new Haggis Horns album, he steps into the limelight as the only singer and features on all seven vocal tracks including «Suzi Traffic». A brilliant vocal range that goes from deep blues to funky rock, he is one of the UK’s unsung soul music vocal heroes.

«Suzi Traffic» is out on May 8th followed by the album «Stand Up For Love» on May 22nd, both on Haggis Records.