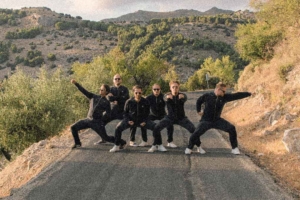 Based in Tallinn, Estonia, Lexsoul Dancemachine is a 6-headed, smoking-hot funk beast known for tearing venues apart with its energetic performances on stage. Active since 2013, the aim of this machine is to hypnotize feel-good music lovers with thumping bass lines, syncopated rhythms, irresistible grooves and soulful vocals. It’s the kind of music you can breakdance to, although in between those hard-hitting sounds you’ll find some more tender moments.
«Money (feat. Cory Wong)» is the last single lifted from Lexsoul Dancemachine‘s upcoming album «Lexplosion II» due on May 29th via Funk Embassy Records. The track brings on the heavyweight Cory Wong who lends his rubber fingers to perhaps the grooviest rhythm-toting funk on the album. In addition to the feature artists’ guitar solo, we’re treated to a bassline and vocals that make it a DJ and radio playlist dynamite, ready to be exploited by funk-soul pioneers. Lexsoul Dancemachine is here to wake you up, make you stomp your feet and jive with their raw street funk on one side and sweet soul on the other!.